April 2019 – Construction is progressing this spring on the southbound viaduct at the Girard Avenue Interchange, part of the $312 million contract to replace the southbound lanes of Interstate 95 between Columbia and Allegheny avenues (Section GR4). 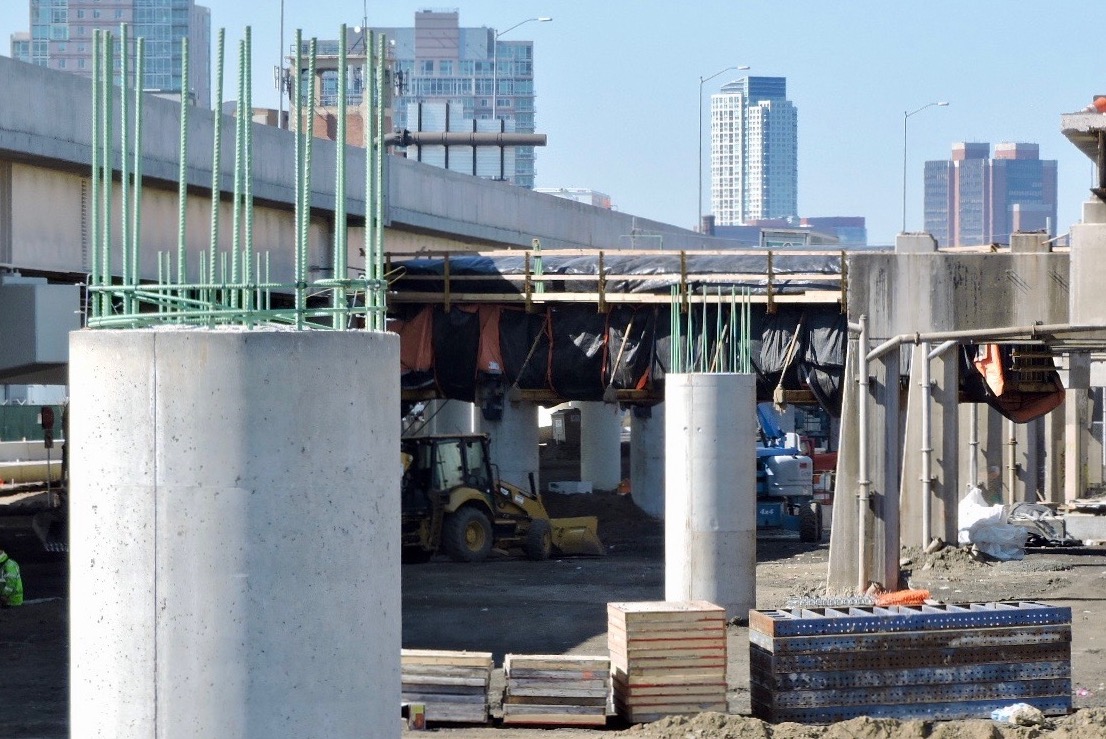 Following demolition in early winter of approximately half of the original, mile-long structure that carried I-95 south traffic over parts of Philadelphia’s Port Richmond and Fishtown neighborhoods, crews began construction of the dozens of support piers (above) for the viaduct between Ann Street and Palmer Street. 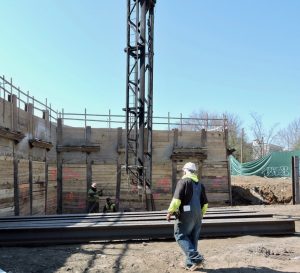 Construction also is underway on the western half of the bridge that carries the southbound Aramingo Avenue spur over Girard Avenue (right). A new retaining wall that supports the embankment for the bridge also is under construction along the spur, which provides Aramingo Avenue motorists with access to the southbound I-95 on-ramp and to Delaware Avenue and the venues along the Delaware Riverfront.

The northern half of the original structure -including the southbound off-ramp to Girard Avenue – was left in place to allow the off-ramp to remain in service while part of the new viaduct is built. 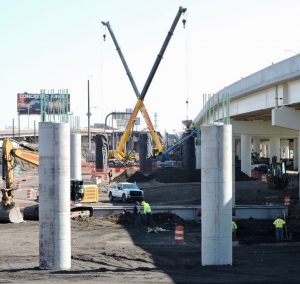 Three lanes of southbound I-95 traffic are traversing the work area using half of the new northbound viaduct, which was completed in last fall. Southbound motorists heading for the Girard Avenue Interchange are using a dedicated ramp lane that remains on the old viaduct until this fall when the off-ramp will be closed for reconstruction as part of the replacement of the northern half of the viaduct. The Girard Avenue on-ramp to southbound I-95 from Aramingo Avenue will remain open during the entirety of GR4 construction.

Later this year, crews will begin demolition of the remaining sections of the viaduct between Palmer and Ann streets. 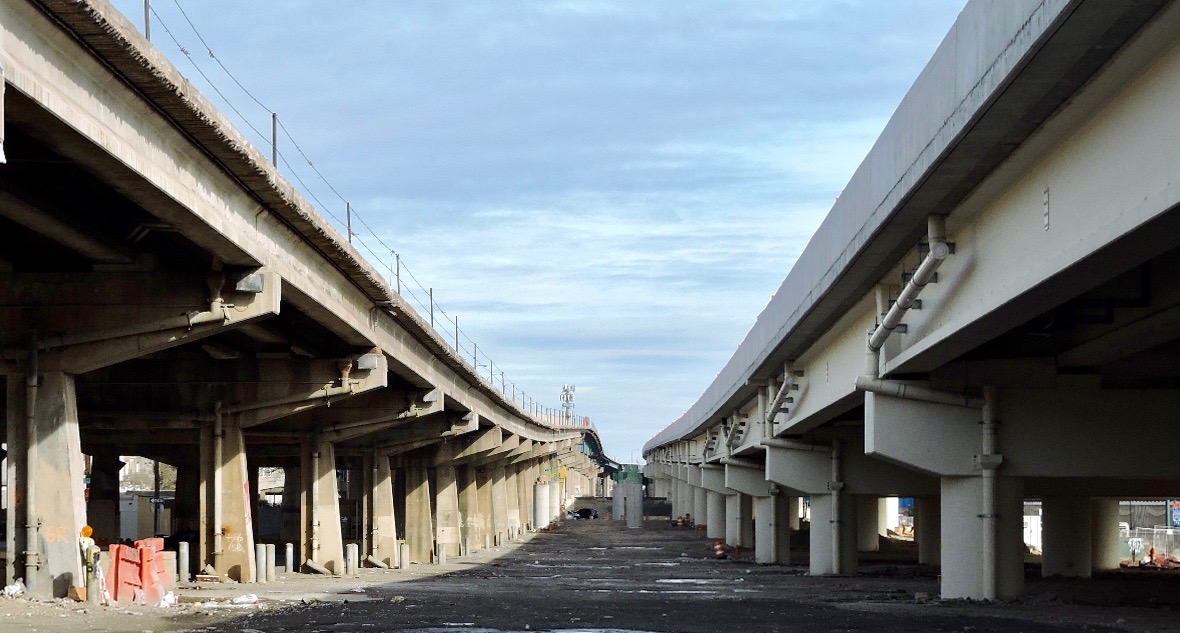 Demolition of the remaining segments of the structure (left side above photo) will proceed the same way that demolition of the first half progressed: The concrete deck will be cut into manageable segments, placed in dump trucks and moved to a disposal site at ground level. Then a crane will be used to pick the deck beams and lower them to the ground to be cut up for transport to a recycling facility. Supports will then be taken down and the area re-graded prior to the construction of any remaining new piers. 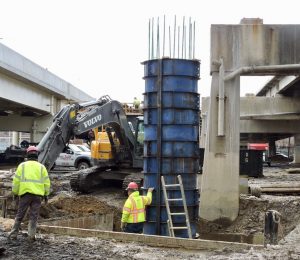 For construction close to residential areas, PennDOT will continue using micropiles to support column foundations. Installing micropiles is a less intrusive but more labor intensive construction process that produces less vibration and noise than the traditional pile-driving that is used at other locations.

Once traffic has been removed from the remainder of the southbound viaduct, work also will get underway to remove and replace the southbound I-95 pavement between the Allegheny Avenue exit and the viaduct at Ann Street.

Work also continues across the interchange work area to install the project’s stormwater management system of pipes and inlets across the sprawling work area.

Building the new southbound viaduct is expected to continue through 2021. The new structure will provide four southbound through lanes as well as a continuous on-off lane that will run between the Allegheny Avenue on-ramp and the Aramingo Avenue on-ramp at the Girard Avenue Interchange.

Other improvements under the GR4 project include construction of noise barrier walls along southbound I-95 from Indiana Avenue to Palmer Street and along the southbound on-ramp from Aramingo Avenue. The project also includes installation of Intelligent Transportation Systems (ITS) components along I-95, U.S. 1 and U.S. 322 that will assist PennDOT and the City of Philadelphia with traffic and incident management on the region’s highways. 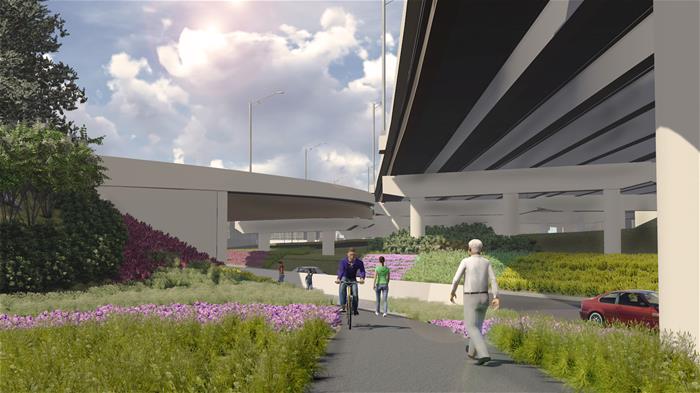 New sidewalks will be built on Aramingo Avenue Avenue between York and Cumberland streets; pedestrian-friendly LED lighting will be installed under sections of the new southbound and northbound viaducts; a multi-use trail (above rendering) will be built beneath and adjacent to the interstate; thematic form liners will be used to decorate wall surfaces on the viaduct’s abutments; and a park with expansive stormwater management features will be constructed within the interchange and beneath I-95.