May 7, 2021 – As construction of the southbound viaduct progresses steadily toward completion this fall, improvements beneath Interstate 95 are taking shape in the form of new paved public spaces, installation of pedestrian-friendly LED overhead lighting, and construction of public parking areas at the sprawling Girard Avenue Interchange.

With large sections now constructed, bridge crews this spring are working their way south, placing the concrete riding surface across the southern third of the mile-long viaduct. The entire southbound structure is expected to be constructed this fall.

Crews also are working on the new southbound off-ramp that will connect motorists with Aramingo Avenue at its new bridge over the interchange area (see below). The new off-ramp will provide access to the neighborhoods surrounding I-95 as well as to the Delaware Riverfront along Richmond Street and Delaware Avenue. 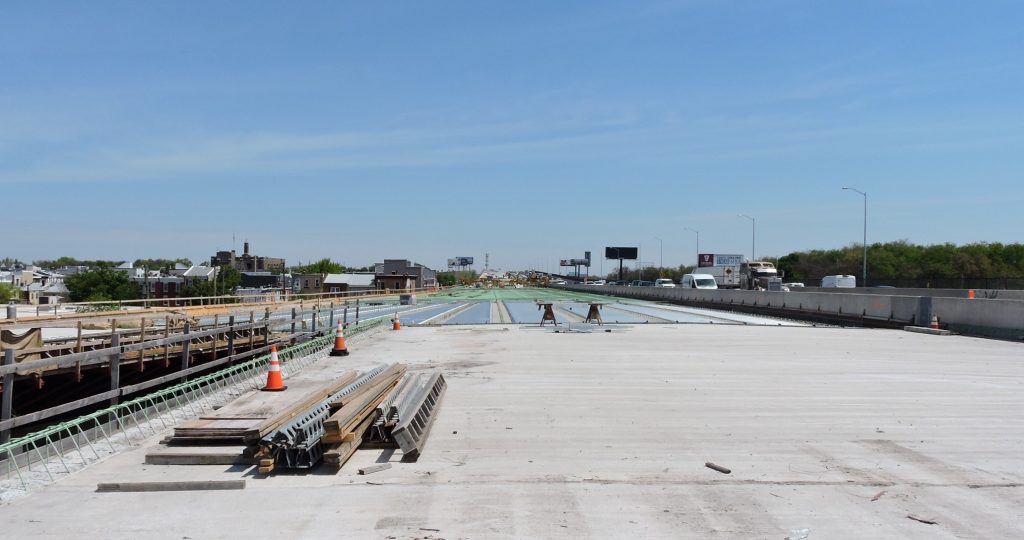 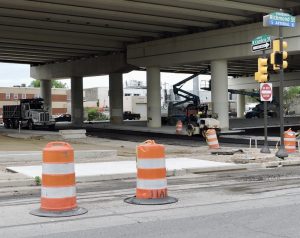 Widening and other improvements to Aramingo Avenue are underway between the bridge and York Street — including landscaping in certain areas — are expected to continue into 2022. New sidewalks have been built (see right) on both sides of Aramingo Avenue between York and Cumberland streets. The contractor also has begun repaving the surface streets under I-95 within the work area.

The new at-grade southbound I-95 roadway is now being placed from just south of the Allegheny Avenue interchange to the start of the viaduct at Ann Street. These new southbound lanes eventually will connect with the viaduct and ramp.

Sound wall panels also are being placed atop parapets along the new southbound viaduct between Indiana Avenue and Palmer Street.

Construction of the new southbound viaduct is expected to continue through fall 2021. The new structure will provide four southbound through lanes as well as a continuous on-off lane that will run between the Allegheny Avenue on-ramp and the Aramingo Avenue on-ramp at the Girard Avenue Interchange.

Concurrent with the overhead construction, work is underway beneath I-95 along the length of the new viaducts on human-scaled improvements to the Girard Avenue Interchange. 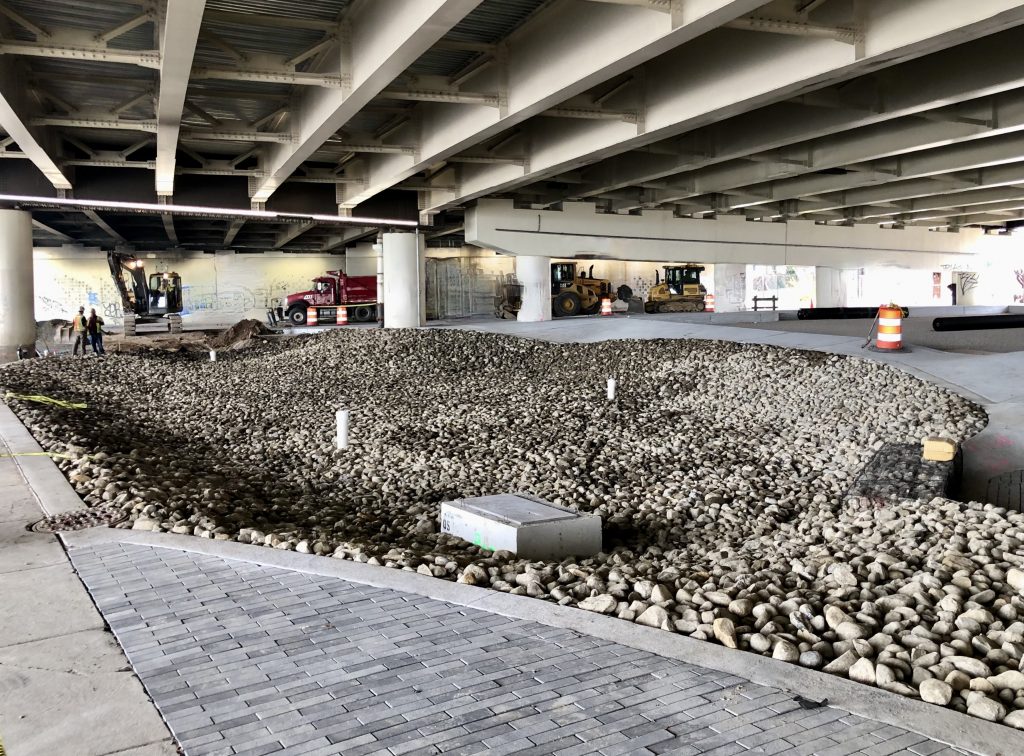 Public space enhancements under construction beneath the viaduct.

Under construction underneath from Ann Street in Port Richmond to Palmer Street in Fishtown is a network of public space enhancements for residents, pedestrians, and cyclists. These spaces include decorative stamped concrete and paver-block pads, sidewalks, and a multi-use trail. 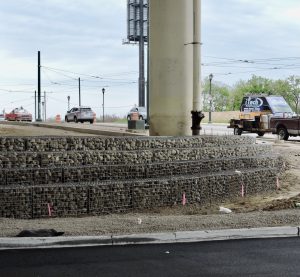 These hard-scape improvements wrap around a number of drainage basins — salted with the earth tones of local river rock (see left) — built to manage and disperse stormwater runoff into the complex drainage system installed with the rebuilt interstate.

A number of small, public parking lots also are being constructed under I-95 along with the other improvements.

As construction nears completion, the new public spaces will be landscaped with plantings and grass strips, and new street lights and overhead LED lighting will be installed.

As construction nears completion, the new public spaces will be landscaped with plantings and grass strips. New street lights and overhead LED lighting will be installed. 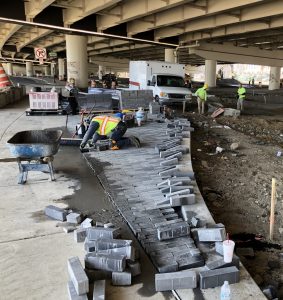 As has been the case for most of 2021, work on this project is proceeding in accordance with Centers for Disease Control and state Department of Health guidance as well as a project-specific COVID-19 safety plan that includes social distancing, use of face coverings, personal and job-site cleaning protocols, and other measures designed to minimize the risk of infection to construction workers, inspectors, and managers.