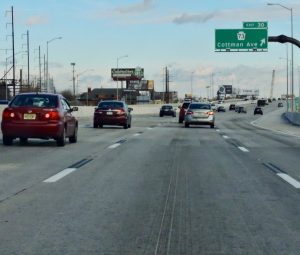 December 2016 – The reconstruction and widening of Interstate 95 at the Cottman Avenue Interchange in Northeast Philadelphia finished in late December, ending almost four years of mainline construction and providing motorists with four through lanes in each direction between the Academy Road and Bridge Street interchanges. Work will continue through 2017 as crews finish improvements to surface streets and installation of a new water main in vicinity of the interchange.

The work at Cottman Avenue is begin done under PennDOT’s $212 million project to improve the interchange and rebuild and widen1.4 miles of I-95 between Rhawn Street and Levick Street. At the time of its letting, the $212,325,000 contract was the largest single construction contract in PennDOT history.

After completing work on the northbound side and placing three lanes of traffic on the new pavement in early fall, crews shifted construction operations to the center of I-95, where they paved the median shoulder and installed concrete median barrier prior to removing the construction barriers and opening all lanes in late December. 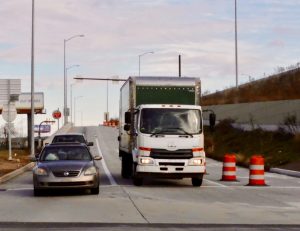 In addition to completing median-area work, crews also finished reconstruction and widening of the on-ramp to I-95 north from Princeton Avenue, and the off-ramp from I-95 north to Cottman Avenue. The improvements to the northbound I-95 ramps compliment similar improvements to the off-and on-ramps on the southbound side that were completed during an earlier stage of the project but still under work zone restrictions. Once the construction barriers were removed from the mainline work area, crews removed the barriers from the southbound I-95 ramp to Bleigh Avenue (right) and the southbound on-ramp from Longshore Avenue, opening both ramps to two lanes.

Over the coming months, crews will complete construction of sidewalks and curbs, install LED (light emitting diode) lights and finish painting the abutment walls under the new I-95 bridges that were built as part of the mainline construction. 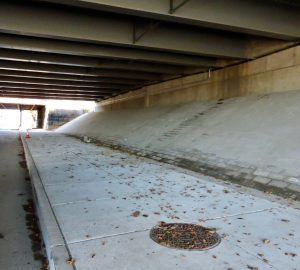 The new bridges over Bleigh Avenue, Cottman Avenue, Princeton Avenue, New State Road, Longshore Avenue, Unruh Avenue, and Magee Avenue have decorative abutment walls depicting various icons that define the adjacent neighborhoods. The ornamental walls and LED lighting are part of the quality-of-life enhancements included in the reconstruction project as the result of interaction between PennDOT and the community through its I-95 Sustainable Action Committee (SAC) that met during the project’s planning phase. Similar SAC-driven enhancements are being included in all of the remaining projects to reconstruct I-95 between the Cottman Avenue and Girard Avenue interchanges.

Work also will finish in 2017 on the extension of Princeton Avenue that runs along side the on-ramp to I-95 north as a barrier-separated, eastbound only road that connects Torresdale Avenue with a new intersection at Milnor Street. 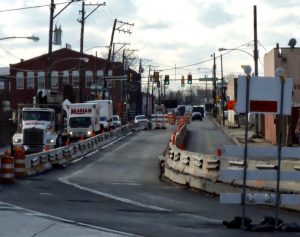 Ground-level work also continues on the west side of I-95 between Cottman and Princeton avenues for relocation of a large water main in the area once occupied by a section of Wissinoming Street. Once the bypass water line is installed and functioning in a complex operation that will extend into 2017, the old main will be removed and the adjacent sewer main will be relocated in its place. The sewer relocation is part of the work to build a new on-ramp to I-95 south from Cottman Avenue. The new ramp is expected to be built and opened by the end of 2017.

The first phase of reconstruction of I-95 at the Cottman Avenue Interchange began in fall 2009. This second and final phase started in late 2012.