July 2017 – Construction to improve surface streets and install a large water main is heading toward completion, setting the stage for work to start later this year on the new ramp to southbound Interstate 95 from Cottman Avenue (Route 73), the final major construction item in the $212.3 million contract to improve the interchange and rebuild and widen 1.4 miles of I-95 between Rhawn Street and Levick Street. 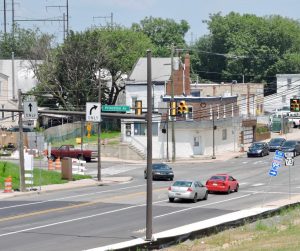 Since mainline reconstruction and widening finished late last year, providing motorists with four through lanes in each direction between the Academy Road and Bridge Street interchanges, crews have been working to complete the project’s remaining street-level improvements and utility installations.

Work on Longshore Avenue, Unruh Avenue, and Magee Avenue at their I-95 overpasses has been completed. Each street features decorative abutment walls (above) depicting various icons that define the adjacent neighborhoods, paver blocks to stabilize embankments, new sidewalks and LED pedestrian lighting. 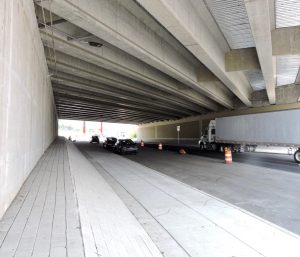 Relocation of a large water main on the west side of I-95 between Cottman and Princeton avenues is expected to finish late this year, allowing construction to start on the new on-ramp to I-95 south from Cottman Avenue, the final major work item in the reconstruction of the Cottman Avenue (Route 73) Interchange. The new on-ramp is expected to be substantially completed in fall 2018.

A third and final contract (I-95/CPU) of the Cottman Avenue Interchange Improvement Project is scheduled to get underway in 2018. That contract will finish any remaining utility work at the interchange area.