March 12, 2020 – The Pennsylvania Department of Transportation (PennDOT) announced today that construction will begin on Monday, March 23 on a project to reconstruct and improve Interstate 95 at the northern end of the Bridge Street Interchange and replace two bridges carrying the interstate over Van Kirk Street and Comly Street in Philadelphia.

“Construction at the Bridge Street Interchange marks yet another milestone in our ongoing investment in the reconstruction and modernization of the entirety of I-95 in Pennsylvania,” District 6 Executive Kenneth M. McClain said. “This program is not only systematically rebuilding I-95’s pavement, its numerous bridges and other structures for commuters, we’re improving the highway’s ground-level presence, its aesthetics, the intermodal connections on surface streets and the practical uses of space along and under the interstate for the thousands of Pennsylvanian’s who live in the neighborhoods along the I-95 corridor.”

Beginning Monday, March 23, through early April, lane closures will be in place from 8:00 PM to 5:00 AM the following morning on northbound and southbound I-95 between the Cottman Avenue and Bridge Street interchanges.

Construction crews will be removing rumble strips from the southbound lanes and performing other construction activities on the southbound side and in the median area to prepare the west side of the interstate to carry three lanes of traffic in each direction during reconstruction of the northbound (east) lanes and two bridges.

Prior to the March 23 construction start, the contractor will be present in I-95’s northbound and/or southbound shoulders between Cottman Avenue and Bridge Street conducting surveying activities and placing work-area signs in and approaching the project area.

Utility relocation crews also may be present at this time along Tacony Street between Levick Street and Bridge Street during daytime operations to begin replacing or relocating water and sewer lines or other utilities. Single lane closures may be in place on Tacony Street for these activities on Mondays through Fridays from 9:00 AM to 3:00 PM.

Under this project (Section BS1), PennDOT will rebuild I-95’s northbound lanes from Levick Street to Carver Street — located at the northern half of the Bridge Street Interchange area — and replace the northbound side of I-95 bridges over Van Kirk and Comly streets.

Northbound reconstruction is expected to get underway this summer following construction this spring to place temporary construction barrier, remove and repave the median, install drainage, and build crossovers at the northern and southern ends of the work zone for a traffic shift that will move northbound I-95 traffic onto the southbound side and median.

The Section BS1 contract also includes improvements to the parking area, lighting and landscaping at Lardner’s Point Park on the Delaware River near Levick Street.

All on-off ramps at the I-95/Bridge Street Interchange will remain open during BS1 construction.

Section BS1 is the first of two contracts to reconstruct mainline I-95 at the Bridge Street Interchange. A second mainline reconstruction project at the interchange, Section BS2, is currently in design and will move to construction following completion of Section BS1 in late 2022. In addition to rebuilding the northbound and southbound lanes of I-95 from Carver Street to Margaret Street, Section BS2 will construct a new replacement interchange located on Tacony Street at the Dietz & Watson/Frankford Boat Launch driveway, where a southbound off-ramp and a northbound on-ramp will be constructed. This is also the location of the proposed Delaware Avenue extension that will be built later under Section BS5.

The H&K Group, Inc. of Skippack, Montgomery County, is the general contractor on the $79,721,368 project which is being funded by 100 percent federal funds. 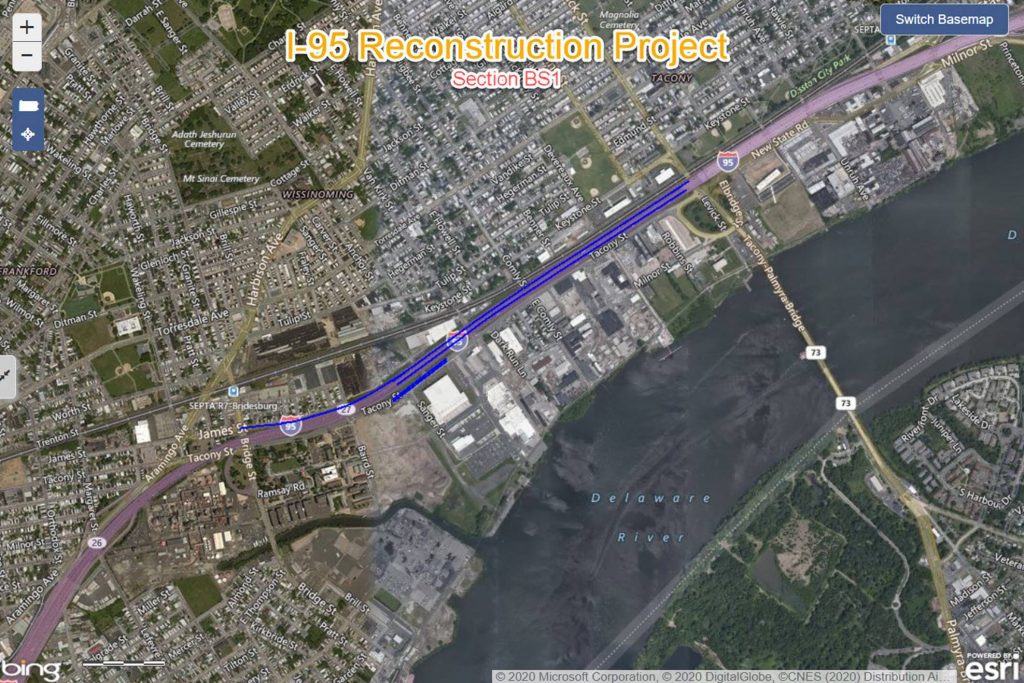